The Gossberg (German: Goßberg) originally is a hill, with the highest point of 483 m (above the sea level), located in the municipality of Wüschheim, next to the border between municipalities of Bell and Hasselbach, in the district of Rhein-Hunsrück-Kreis. It is also part of the low mountain range of Hunsrück in the state of Rhineland-Palatinate, Germany. In the period of 1984–1989, the summit of the hill was excavated more than 30 m deep and transformed into a top-notch nuclear–biological–chemical (NBC) bunker, operated mainly by U.S. Forces, in order to serve as a frontline center of highly-secure communication among all NATO troops in Europe, missile guidance and missile launch control center for the nearby missile base Pydna in case of the anticipated (back then) World War III and the associated nuclear holocaust.

As it will become apparent from the next sections, for Gossberg, in order to meet the high expectations in case of a real nuclear war and allow the operating staff to efficiently execute complex tasks under a lot of stress (essentially, on the edge between life and death), it had to be designed with the best knowledge and experts available at that time, integrate advanced machinery and computer equipment. Accordingly, by the end of construction in 1992, the gross cost of the bunker reached approximately $90,000,000 (equivalent of about $153,599,715 in 2016).

It is truly fascinating how the bunker is designed to protect its inhabitants from all sorts of hazards associated with war and/or terrorism, and especially a direct nuclear strike. In fact, Gossberg is comprised of two nested bunkers! That is, in total, there are eight bearing walls, where the four inner ones enclose the inhabitable bed of the interior structure, while the four outer ones enclose the four former ones and are placed apart from them with a hollow gap in between. Such walls are collectively known as nested shield hulls, the inner and the outer, each produced out of reinforced concrete and additionally prestressed. The thickness of the inner shield hull is 0.80 m and of the outer one is double of the former. As was already mentioned, both shield hulls are separated by hollow space, which has width of 2.00 m and serves three major purposes:

Furthermore, the two shield hulls are blast-resistant, i.e. internally they follow similar concept as explosion vents do and will release an intense outward-pointing stream of pressure-gradient force when exposed to external (blast) overpressure in attempt to deflect and/or mitigate its destructive impact.

The thickness of the bottom plate is 1.00 m and of the cover plate of the inner shield hull varies between 1.00 m and 1.20 m. The cover plate of the outer shield hull consists of a so-called Zerschellschicht (a layer of lean concrete on top of the reinforced concrete construction to reduce damage inflicted by explosions) having thickness of 1.05 m and an overlying layer of fluid concrete with quartzite blocks having thickness of 1.10 m. Last but not least, there is a soil layer of 0.40 m on top as a green roof.

The entire building extends for about 13.30 m deep under the ground and for about 10.35 m above the ground, while its horizontal dimensions (length × width) are 50.30 m × 45.80 m respectively. As a result, the gross area is approximately 17,000 m2 (including the outer plot area), the gross volume is roughly 28,000 m3, and the summit of Gossberg is almost 8.00 m higher than before the construction.

Internally, Gossberg is a three-level building, where the two upper levels are connected with two stairways and a heavy elevator (up to 10,000 kg), while the two lower levels are connected only with a steel ladder. Physical security and separation between rooms are achieved via a sluice system with an option to manage it through the central access control panel. 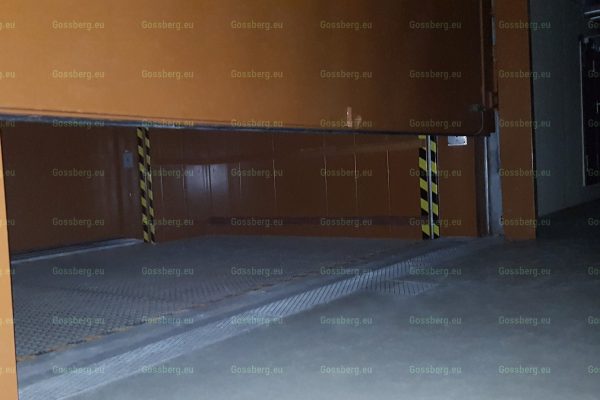 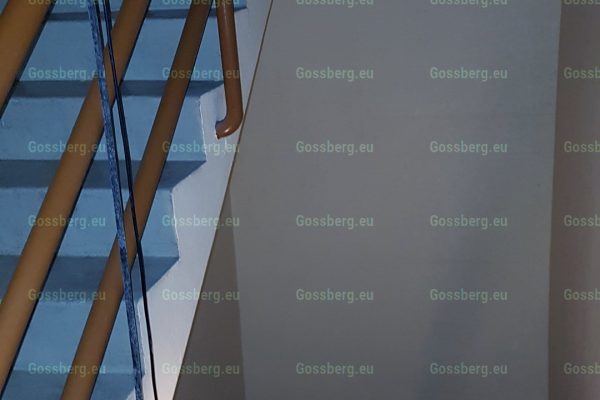 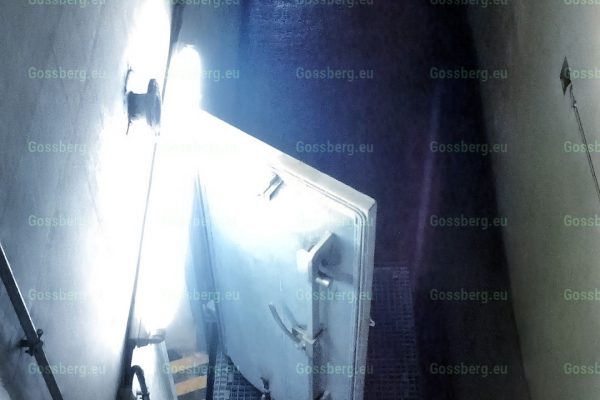 Level 2 (ground floor) is intended to accommodate administration, security surveillance, computer equipment, and electrical engineering. By default, it contains nine rooms, but could be expeditiously reconfigured (by operating staff on their own, even during ongoing war) thanks to (re)movable walls, suspended ceiling, and raised floor (on stilts). In addition, there are two toilet rooms and a power supply room. To summarize, the net internal (usable) area is 1,185 m2 and maximum floor load is 2,000 kg/m2. Other features include:

Today, the primary use cases for level 2 could be (but not limited to): 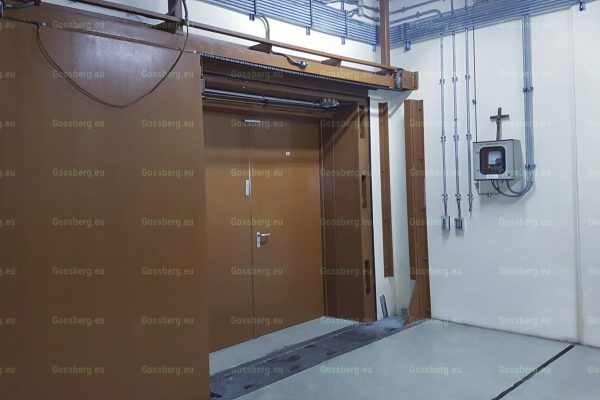 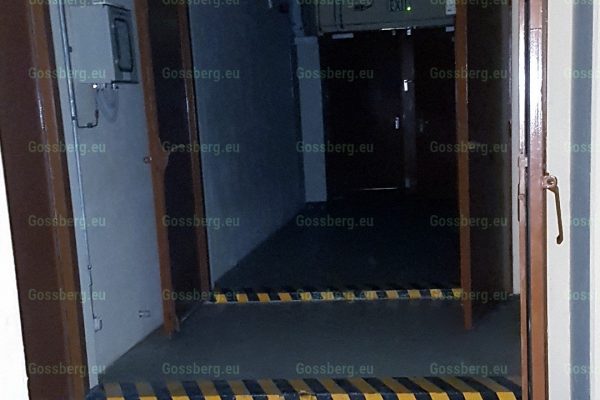 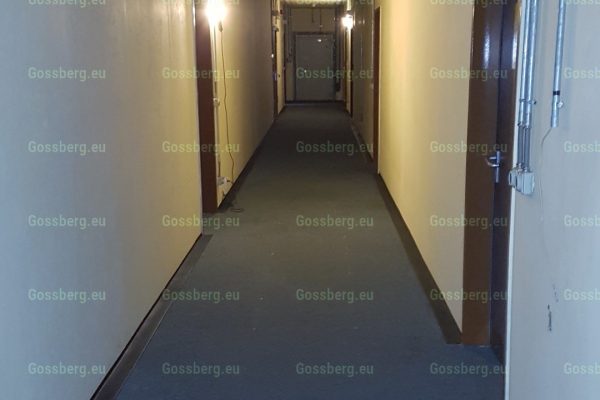 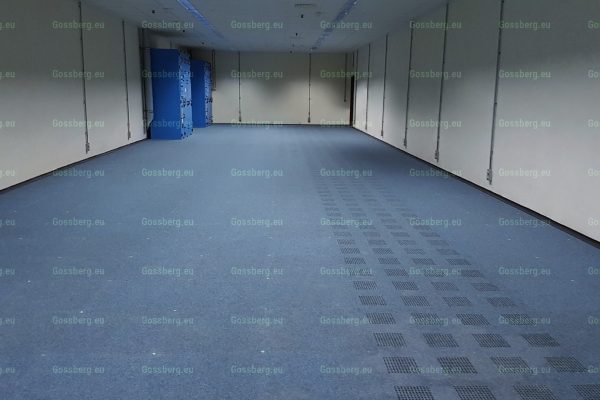 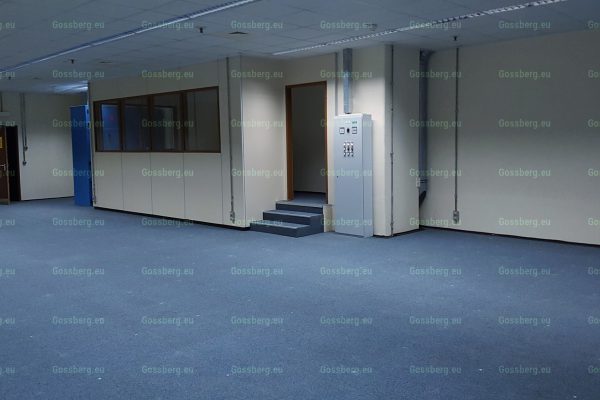 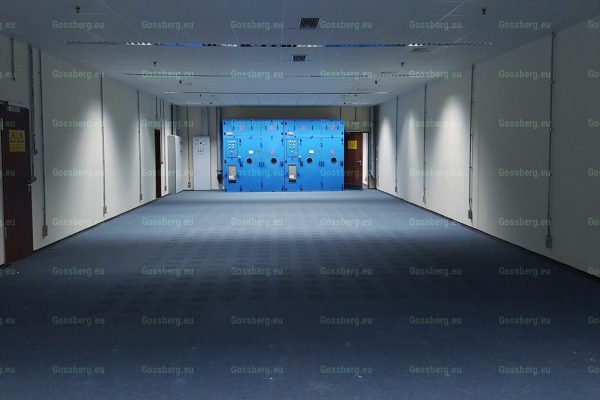 Level 1 (underground floor) is intended to technologically sustain the building and provide storage space (e.g. for food, military and computer equipment, weapons, etc.). Walls are not (re)movable, types of both ceiling and floor vary between rooms. In addition, there are two toilet rooms, a sanitary room, and a decontamination shower room. To summarize, the net internal (usable) area is 1,664 m2 and maximum floor load is 5,000 kg/m2. Other features include:

Today, the primary use cases for level 1 could be (but not limited to): 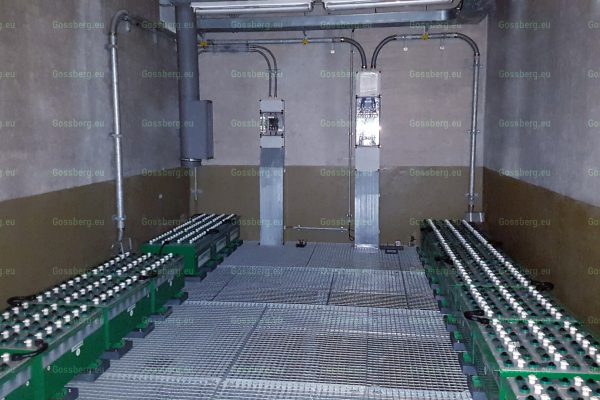 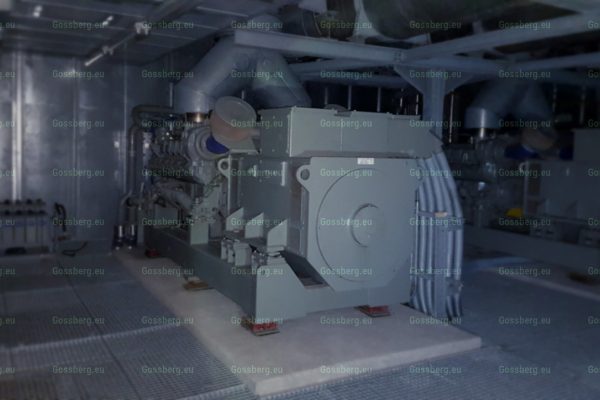 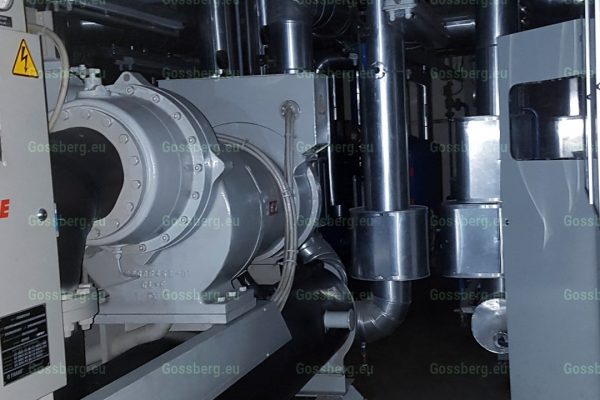 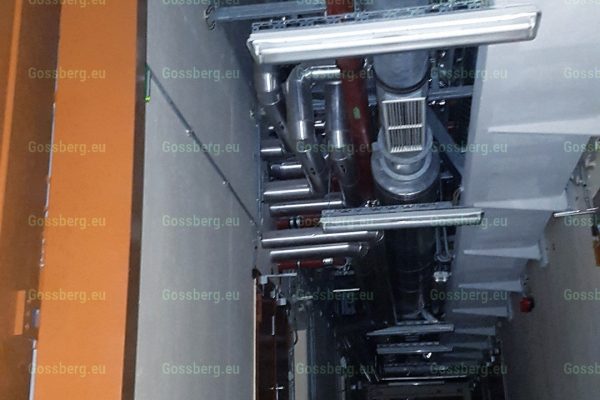 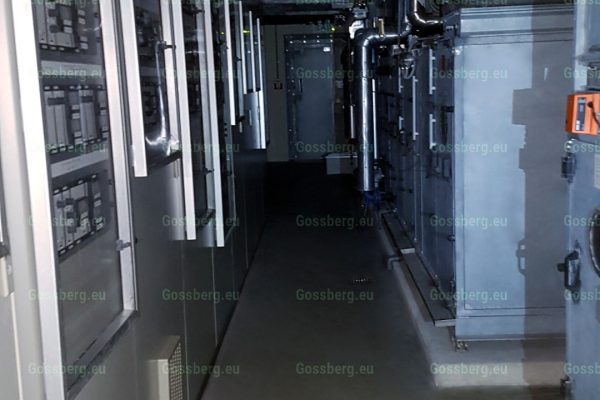 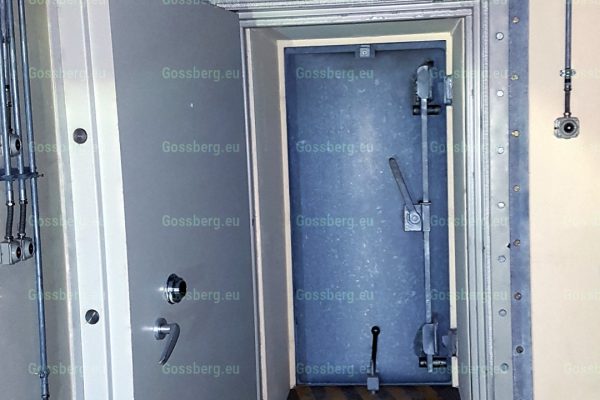 Level 0 (underground floor) is intended to technologically sustain the building and provide storage tanks (e.g. for water and oil). The corresponding net internal (usable) area is only 450 m2. Storage tanks include: 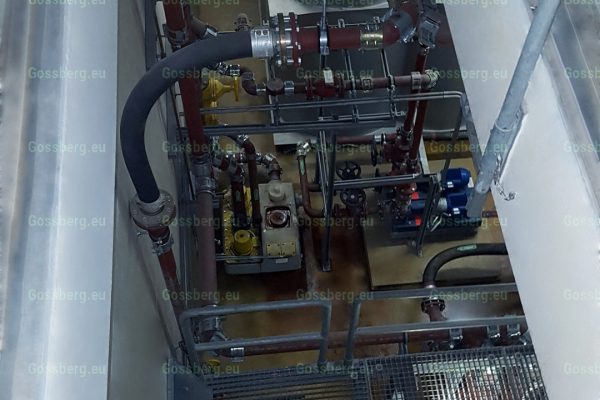 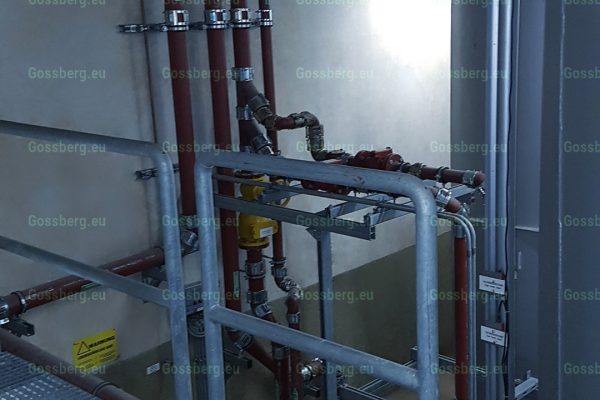 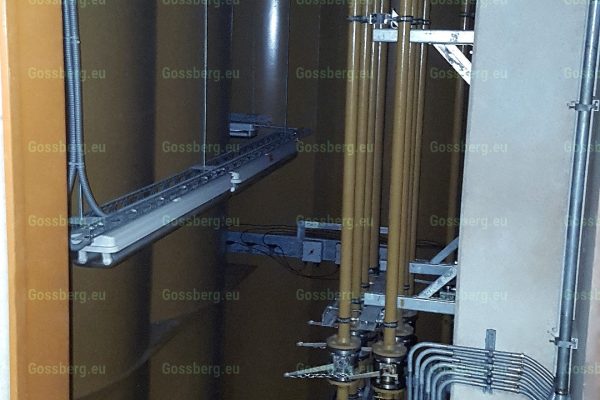 The outer plot is surrounded by a fence of more than 2.00 m high and its gross area is 13,783 m2. Its ground features a road, a parking, and even a helipad, all paved with interlocking brick stones. Above the ground, there are located a small transformer building and a hill of more than 10 m high with an entrance to the bunker. Entrance has area of approximately 500 m2 and is fortified by a massive armored sliding door that weighs beyond 28,000 kg. 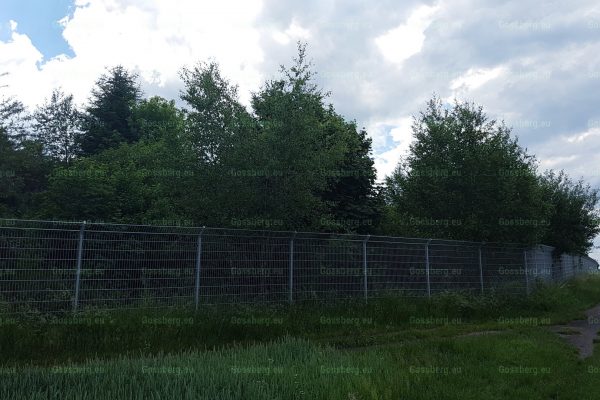 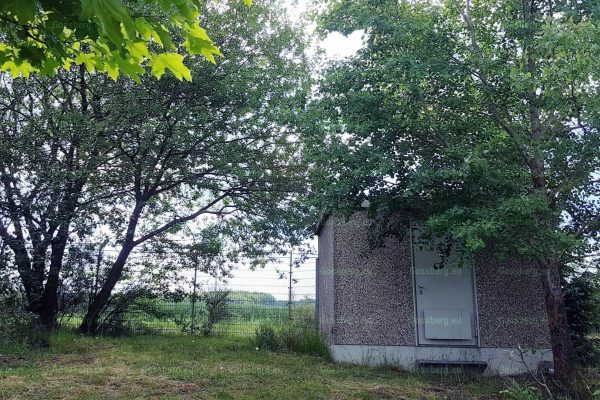 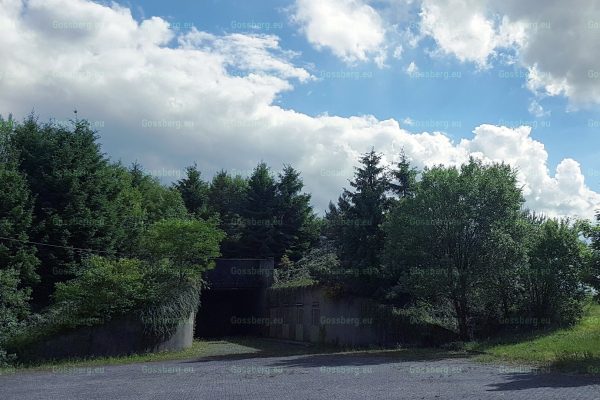 The Gossberg Gemarkung is located in the northern part of the municipality of Wüschheim, southwest of the border between municipalities of Bell (southeast of Hundheim) and Hasselbach. Wüschheim is an Ortsgemeinde (a standalone municipality belonging to a Verbandsgemeinde — a collective municipality in the district of Rhein-Hunsrück-Kreis) that belongs to the Verbandsgemeind of Simmern in the state of Rhineland-Palatinate, Germany. Apart from that, the Gossberg hill is part of the low mountain range of the central Hunsrück in about 3 km to the east from “Hunsrück Heights Road” (German: Hunsrückhöhenstraße — a scenic route across the Hunsrück, originally used as a military road and built on Hermann Göring’s orders), also known as the federal highway B 327 between Kappel (roughly 6 km to the southwest), Kastellaun (roughly 6 km to the north), and Koblenz. The Landesstraße L 226, lying south of Gossberg, connects Wüschheim with B 327 and Simmern (about 8 km to the southeast). The international airport, Frankfurt–Hahn, is only 17 km (around 20 min by car) to the southwest via B 327. 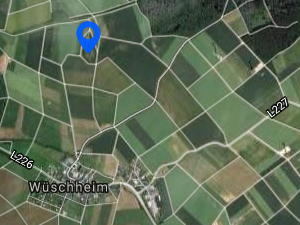 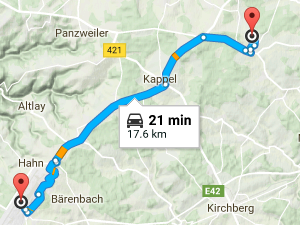 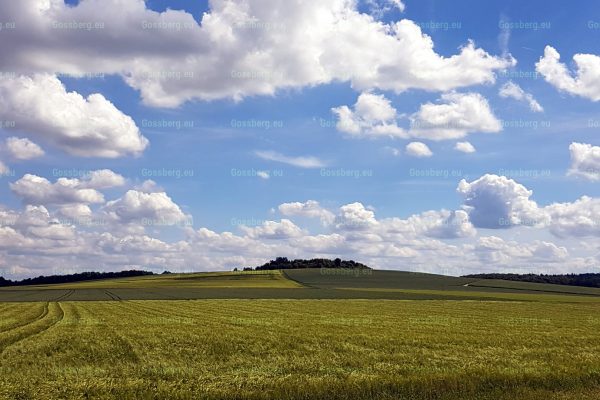 Gossberg and its neighborhood, historically being strategically and militarily important zone (perhaps due to elevation), was a location of a radar system of the U.S. Forces since 1956.

Metro Tango (MT), the NATO‘s reconnaissance unit led by U.S. Forces, specialized in tactical missile guidance and air force coordination from 1978 to 1992. The name of the unit derives from the first letters of the “Missile Training” collocation as it was the predominant mission of the unit’s location in the municipality of Wüschheim. In fact, the MT unit was stationed roughly 4 km southwest of Gossberg in the direction of Kappel, in Vorderhunsrück (527 m), the highest point of the federal highway B 327.

Hahn Air Base, today known as the Frankfurt–Hahn Airport, participated in preparations for deployment of the BGM-109G Ground Launched Cruise Missile (GCLM) units from 1982 to 1985 and their subsequent maintenance by the reactivated (on April 1, 1985) 38th Tactical Missile Wing (TMW) at the nearby (roughly 3 km north of Gossberg) missile base Pydna (also known under the code name, Wüschheim Air Station) between Bell and Hasselbach from 1985 to 1990.

At the same time, during 1984–1989, the summit of Gossberg (483 m) was excavated more than 30 m deep in order to accommodate the subsequently constructed high-end NBC bunker (proof against nuclear, biological, and chemical weapons). After completion, the MT unit was supposed to operate the bunker by carrying out the following duties:

However, despite all the construction efforts, at the beginning of 1990s, the facility was given up on the basis of the overall relaxation of geopolitical tensions between the Eastern Bloc and the Western Bloc (see Cold War), globally recognized decrease in the probability of the nuclear warfare threat, and the associated disarmament. As a result, the bunker was never put into the actual military operation and remains in an excellent condition up until now.

As of 2017, the Gossberg NBC bunker is available for sale and rent as a multi-purpose building at negotiable price. Learn more…

Have questions about building or land and want to see more pictures of the Gossberg bunker?

Have a specific inquiry or wish to arrange a private showing tour to see the Gossberg bunker?

Did you find the story of Gossberg interesting? Share it with others!

Have a specific inquiry or wish to arrange a private showing tour to see the Gossberg bunker? Contact

Did you find the story of Gossberg interesting? Share it with others!